The village of Rudine is one of the last well-kept secrets on the island of Hvar.  It is located 2 km north of Stari Grad Town, the major port of the island, and is divided into Vela Rudina and Mola Rudina. Today Rudine count approximately 19 permanent residents. This number rises during the summer but never to the point of overcrowding the area. That way Rudine manages to preserve its discrete rural charm. 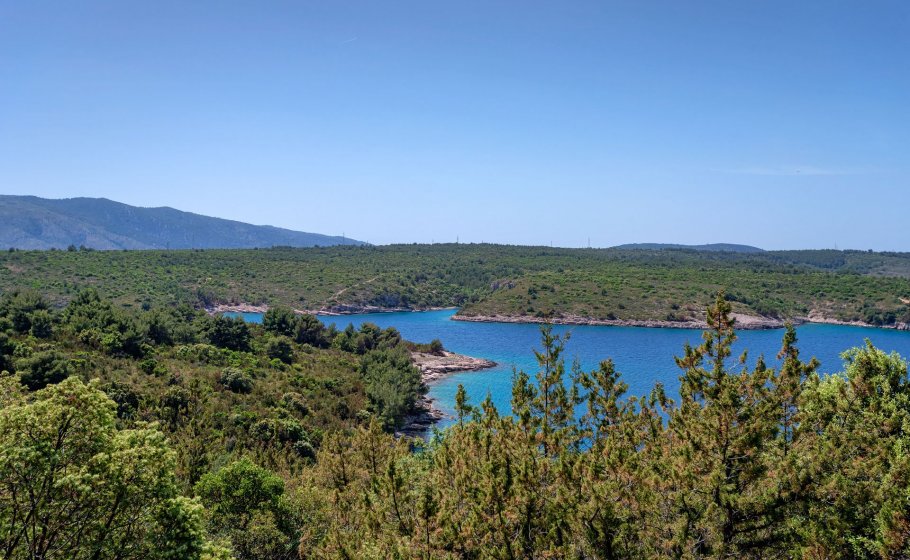 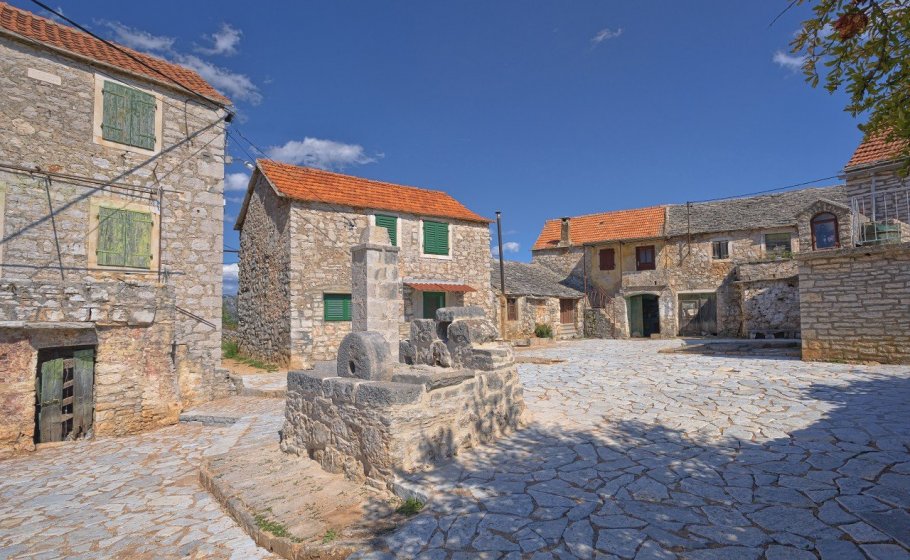 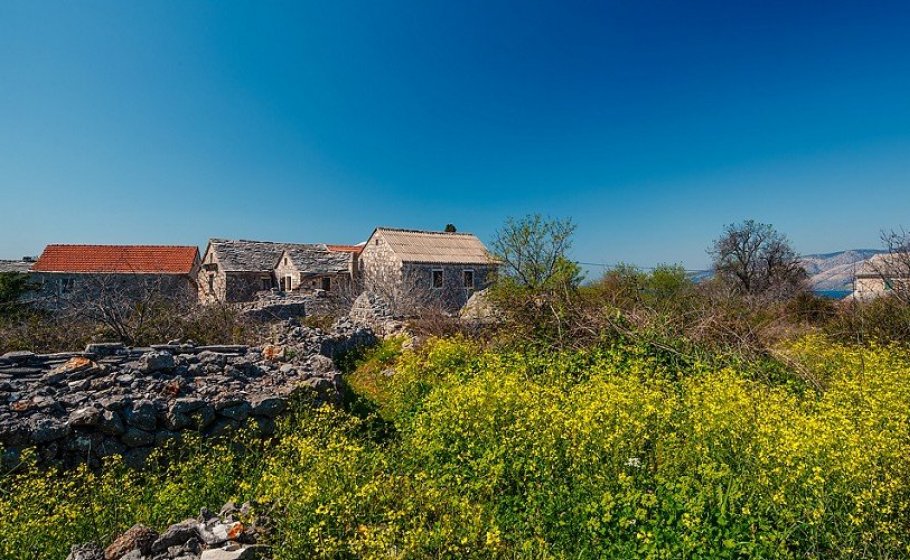 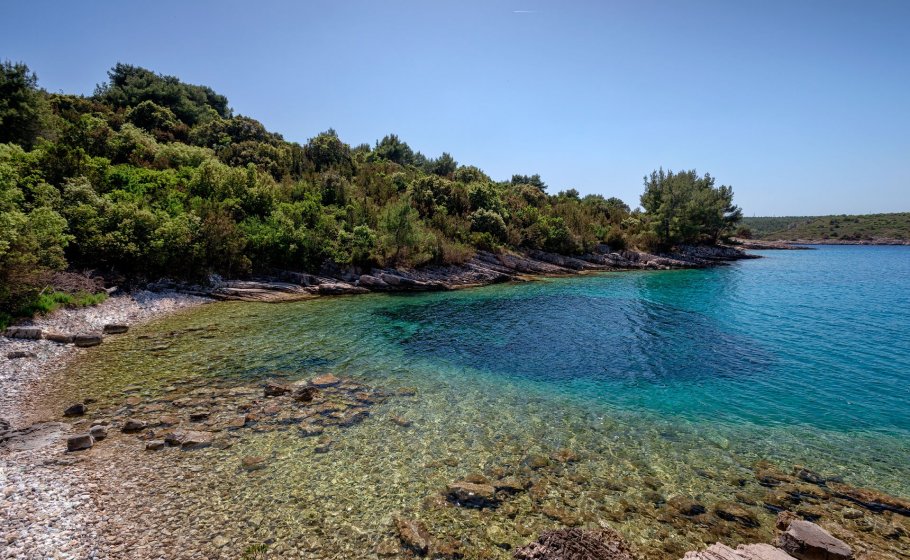 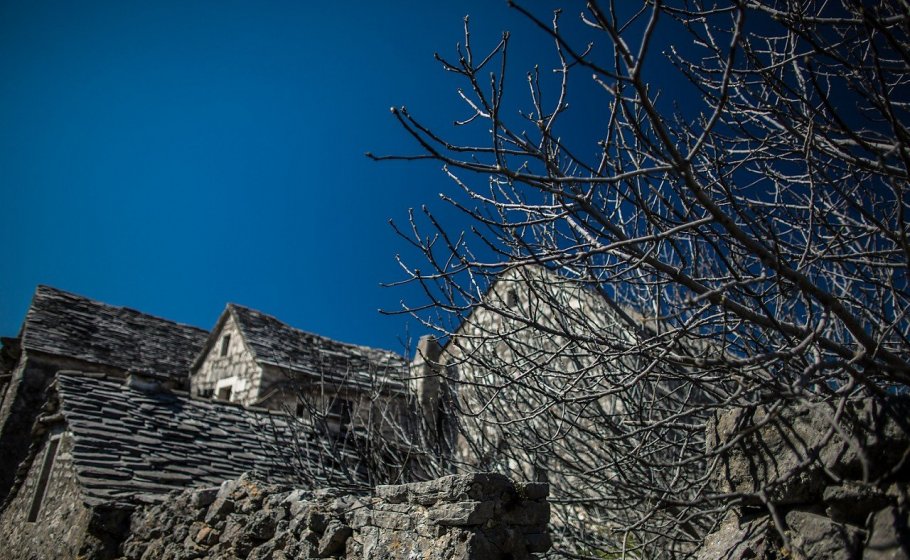 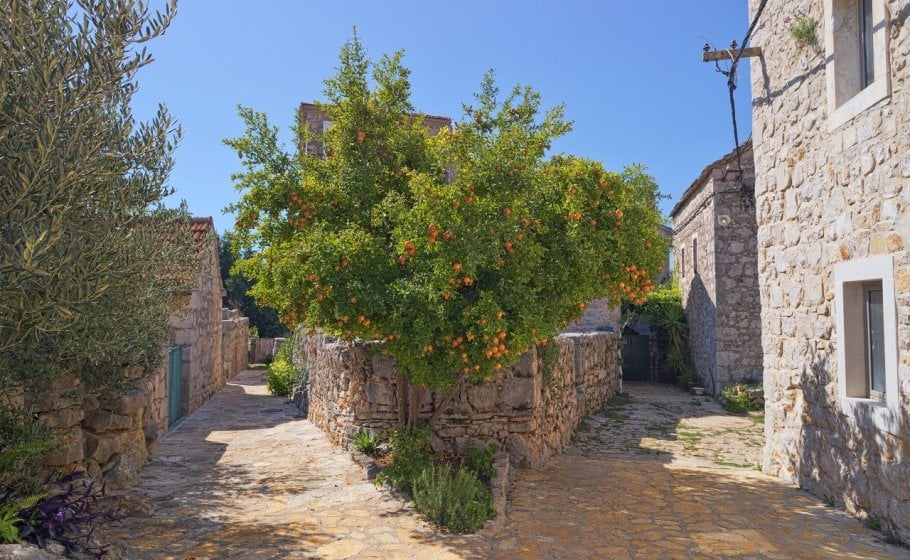 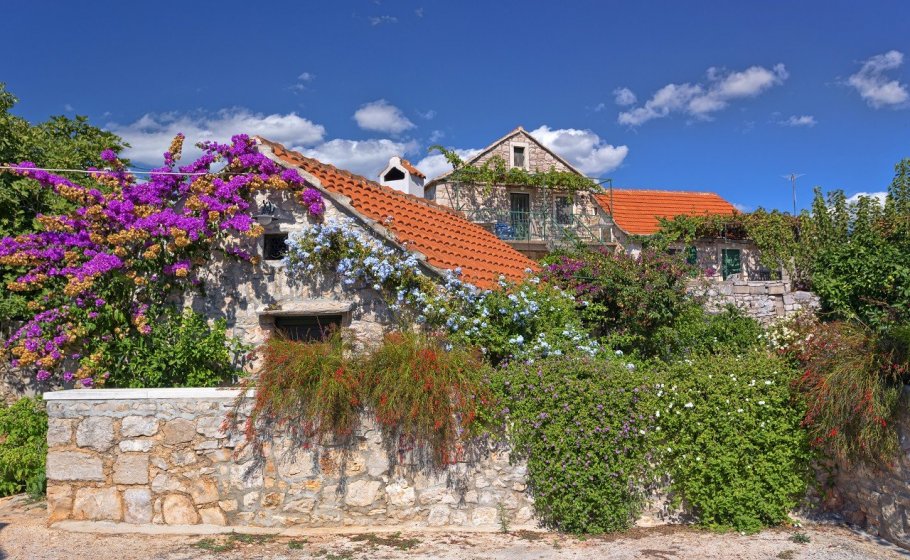 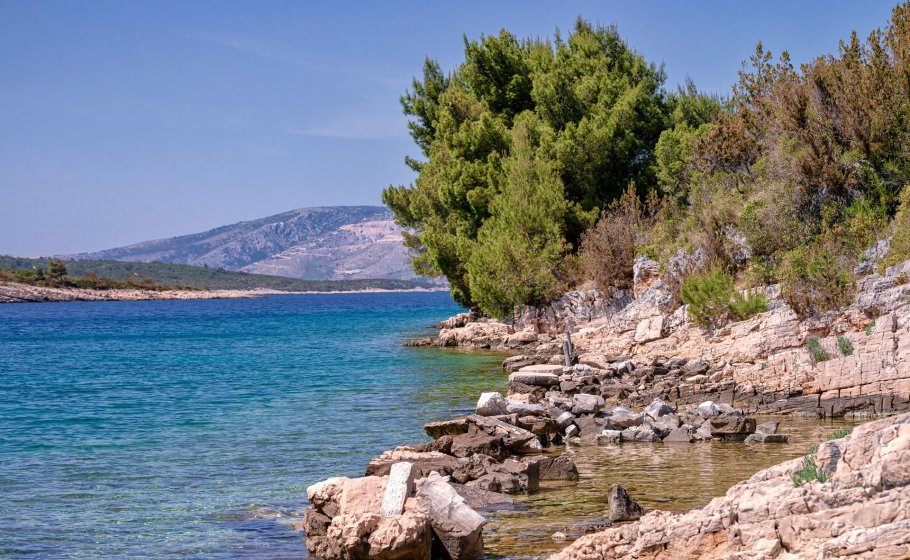 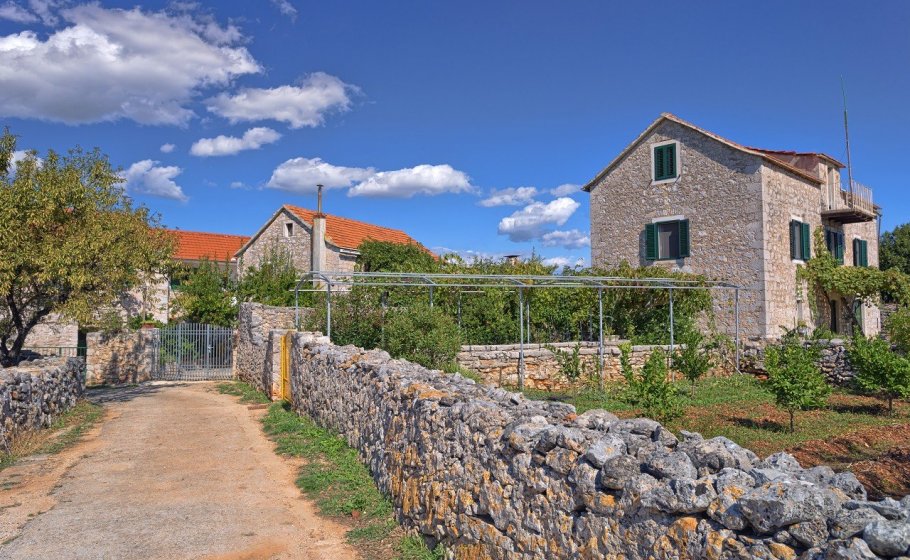 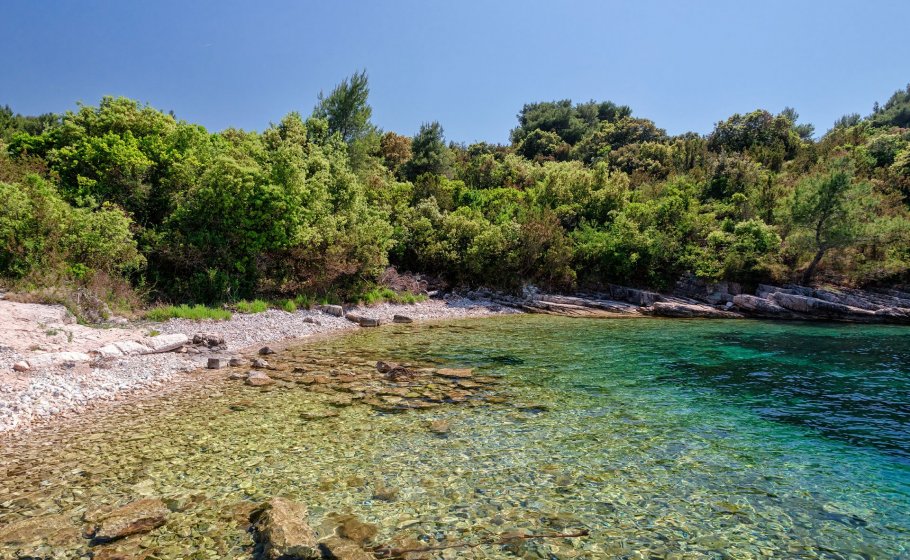 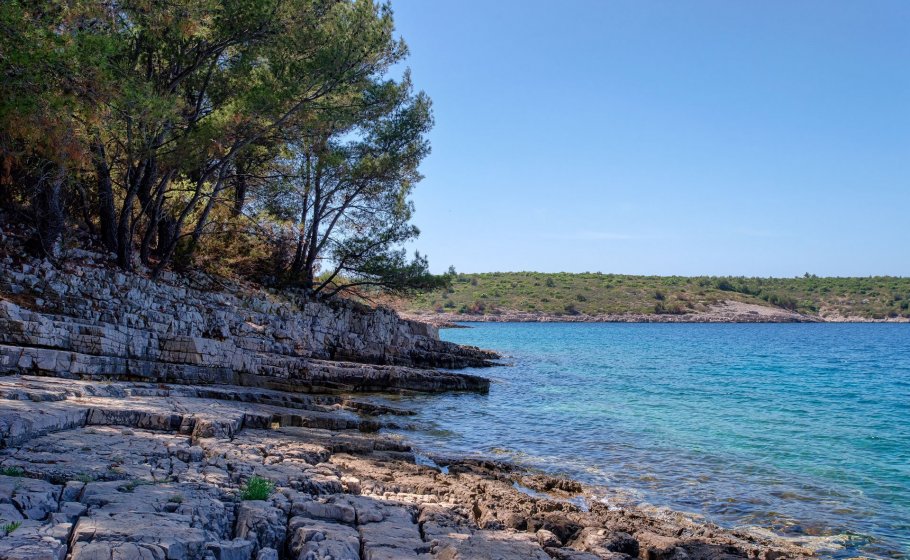 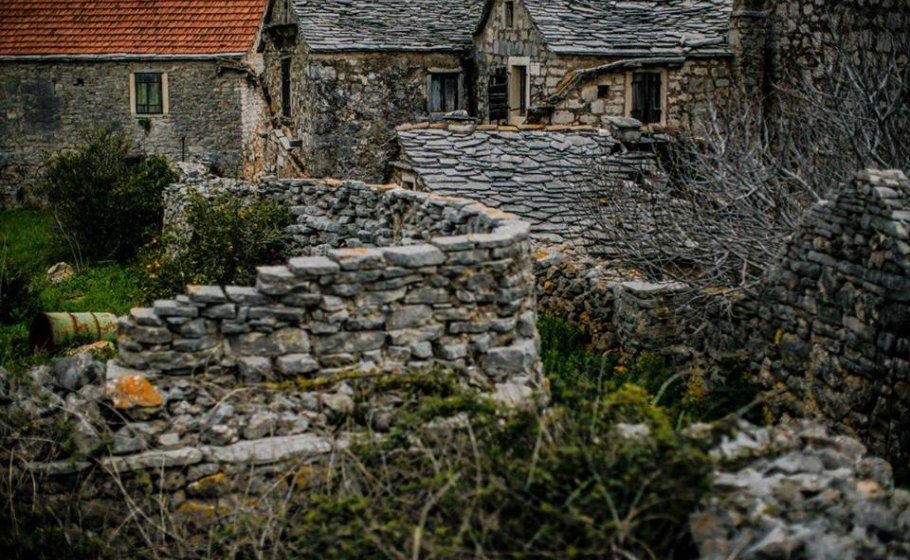 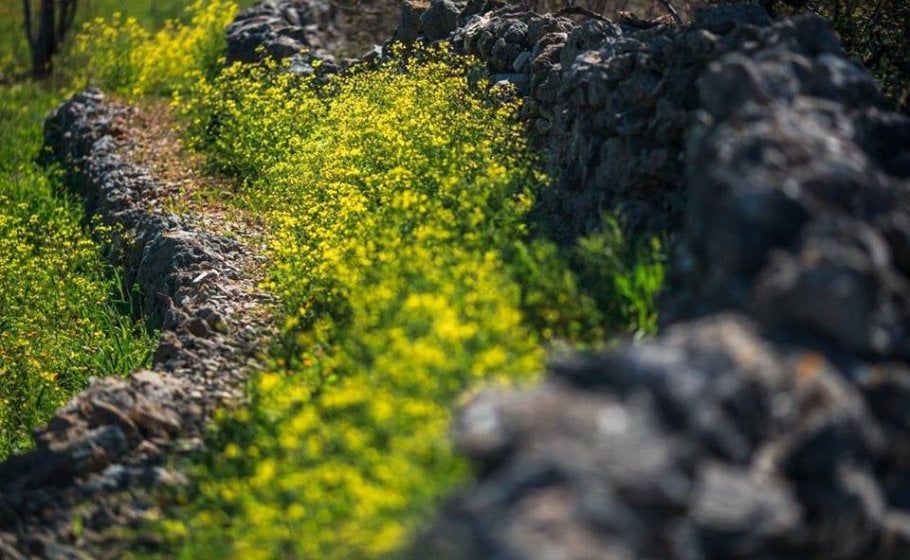 However, it wasn’t always like that; at some point the number of people living in Rudine was much higher. In fact, in the early 20th century, 340 people lived there. For this reason today’s Rudine have a certain De Chirico quality. It is quite likely you’ll find yourself surrounded by abandoned houses and properties that still somehow reflect the life energy of the past times.

The first of about twenty houses in the hamlet of Mola Rudina was built in 1663 by the family of Pietro Soglian, who had resettled there from the east of the island, from Gdinj. The last name of Šoljan is shared by everyone in Mola Rudina, as well as what they do for a living – agriculture and fishing.

The center of the hamlet, which is a protected cultural heritage of the Republic of Croatia, hides a small square – a remnant of times past – where an olive mill, a grape mill, and a lamp on a stone column still stand and bear witness to olden days. The village of Rudine is one of 6 eco-ethno villages on Hvar island, places where locals and tourists can appreciate the beauty of the past through the preservation and promotion of some of Dalmatia’s hidden treasures.

The development of the eco-ethno villages concept is an important one for rural tourism in Croatia, and there are several important components at its core: the preservation of nature, architectural heritage, promotion of traditional Croatian products, the return of inhabitants to abandoned villages, the revival of traditional crafts and goods, the renovation of traditional Dalmatian stone houses, schools and churches...

The busiest time in the village of Rudine is during the first half of August when Rudine Art festival is on. In Vela Rudina, within the walls of old and abandoned structures, you can see the works of artists living in Rudine together with artworks of those that were born there. Such example is Magda Dulčić, the best Croatian cartoonist. Rudina Art is a charming, intimate event in which, in a very informal atmosphere, you can not only enjoy the art, but also hang out with the artists.

Another big plus for Rudine are beaches – one more proof that this place is a perfect destination for a holiday. Other beaches on the island, although beautiful, are crowded during July and August, but here you don’t have to fight for your place under the sun. Just about 700 m from the village there are crystal clean and amazingly beautiful intimate beaches overlooking the island of Brac. The most popular one in these parts is called Žukova, where the actual dinosaur footprints were found.

Those visitors that are more of an adventurous spirit can explore amazing secluded beaches and caves along the Kabal peninsula.

Those that are even more extreme in their walkabouts who managed to get to the top of Kabal will have the opportunity to experience a man-made attraction that is rather seldom mentioned in the conventional tourist guides – the tunnels made in ex-Yugoslavia upon the orders of then president Josip Broz Tito. The purpose of the tunnels was to defend the island from possible attacks so if you make an effort to get to there this could be the closest to the James Bond experience you will ever get. Consider filling your thermos bottle with a Martini to intensify the experience.

Also, we recommend you go there in the late afternoon so you can catch the incredible sunset from the top – undoubtedly one of the most beautiful on the entire island.

When, and if, you ever get tired of meditation and adventure you can always go to a nearby town of Stari Grad. As said before, the distance is only 2 km so you can easily get there on foot or by bicycle. 384 BC. Greek colonists founded it and named it Pharos. Centuries were rather kind to Stari Grad so on every step you can find the remains of its glorious past. Its citizens are particularly proud of the Stari Grad Plain that dates back to ancient times and is listed on the UNESCO World Heritage list as a unique example of a well preserved cadastral plan.

There is one special thing that connects Stari Grad Town with Rudine – the saffron spice. Together with honey it is a key ingredient in making the delicacy called Paprenjak. It is a biscuit that became the symbol of the town and the true Paprenjak making experts accept only the saffron from Rudine.

Today, Stari Grad Town is a sleepy little Mediterranean town that lives a full life during the tourist season. From the perspective of Rudine, Stari Grad might be of interest since the nearest grocery store, post office, doctor, bank and all the charming galleries, cafes and restaurants are there.

In case you wish to explore some other places on the island, such as Vrboska, Hvar or Jelsa you’ll need a car. In case you don’t have your own car - you can always rent one in our agency.

A simple traditional stone beauty located in the charming village of Rudine, cottage Antheia, was built in the 15th century. If you are looking for the genuine Dalmatian experience, authentic cuisine, a spot where you can be at peace and sort your thoughts - look no more. This is the place.