When we look at the map of the island of Hvar, the relief looks as if the hand of a mischievous sculptor pushed all the heights away from the Stari Grad field towards the south of the island, building a sort of a backbone. To achieve a dramatic effect, the south side of this mountain range boasts rocky slopes that slide steeply towards Sveta Nedjelja. (...) 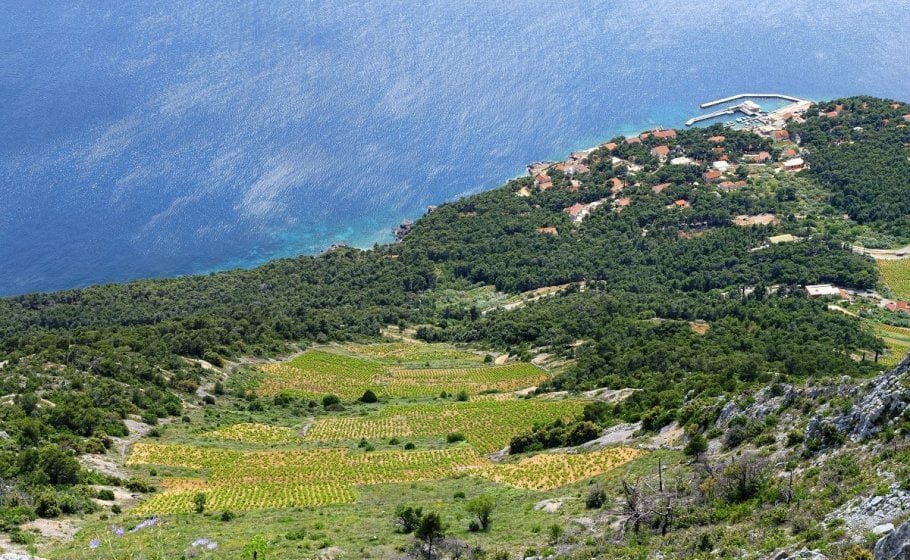 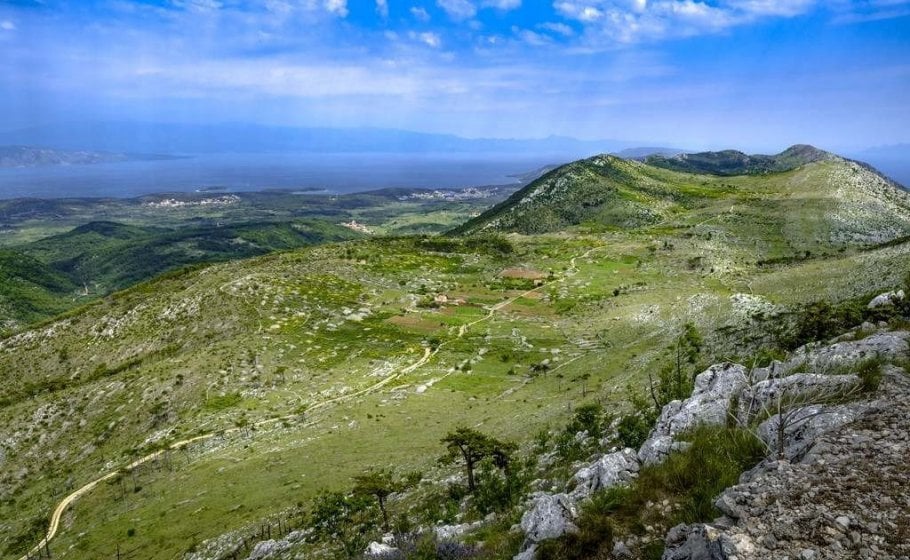 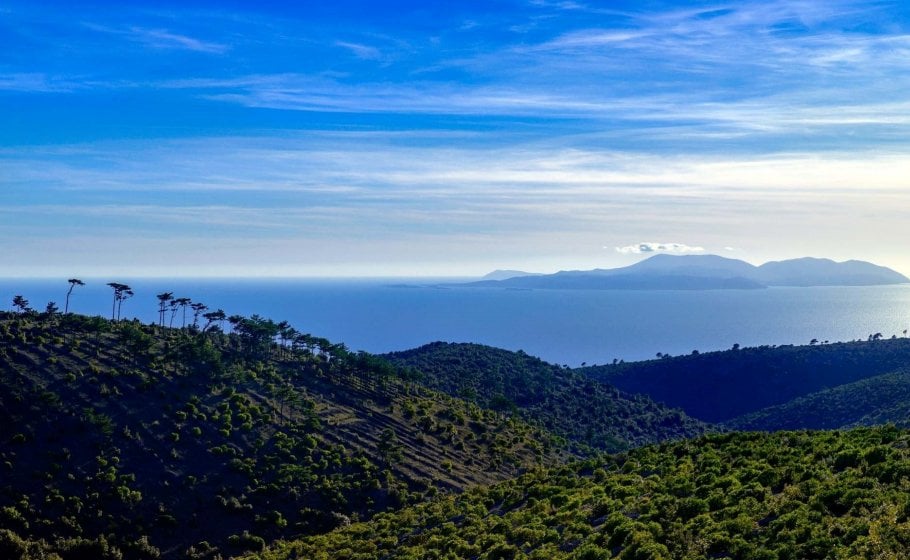 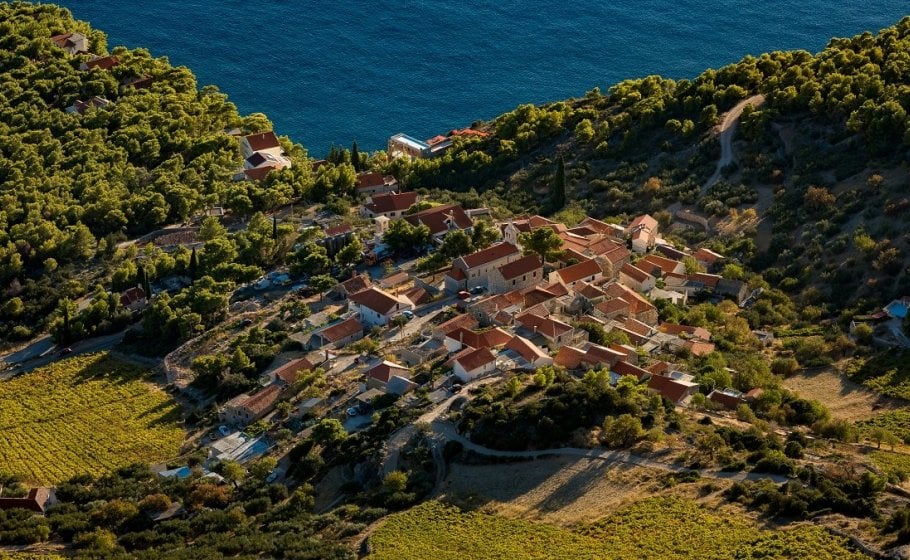 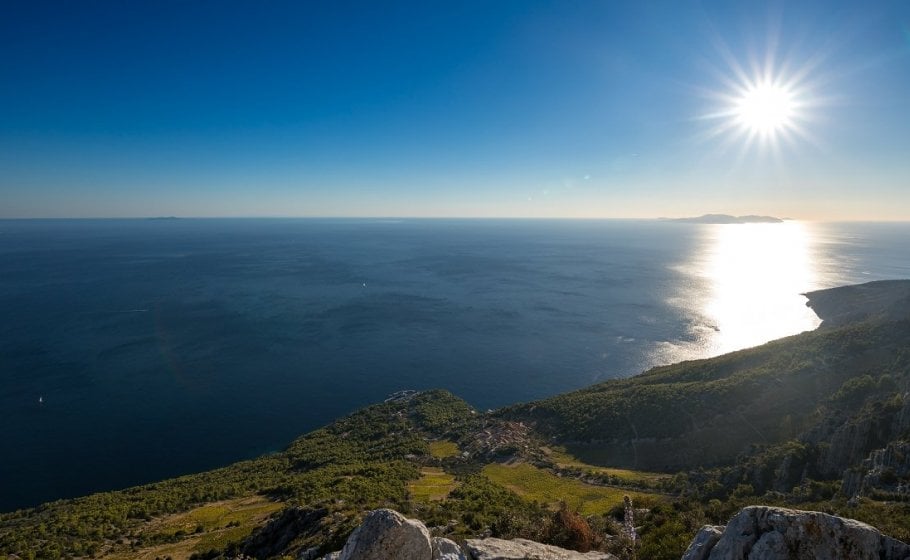 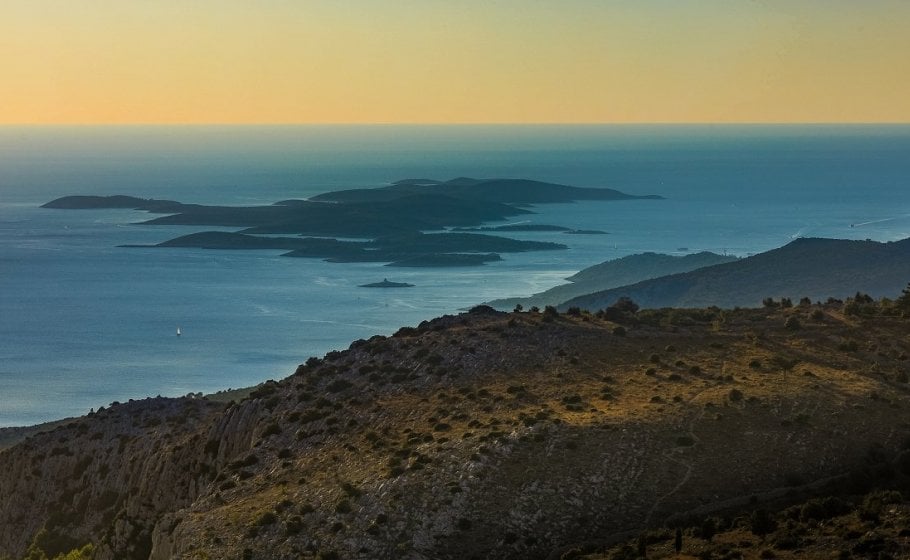 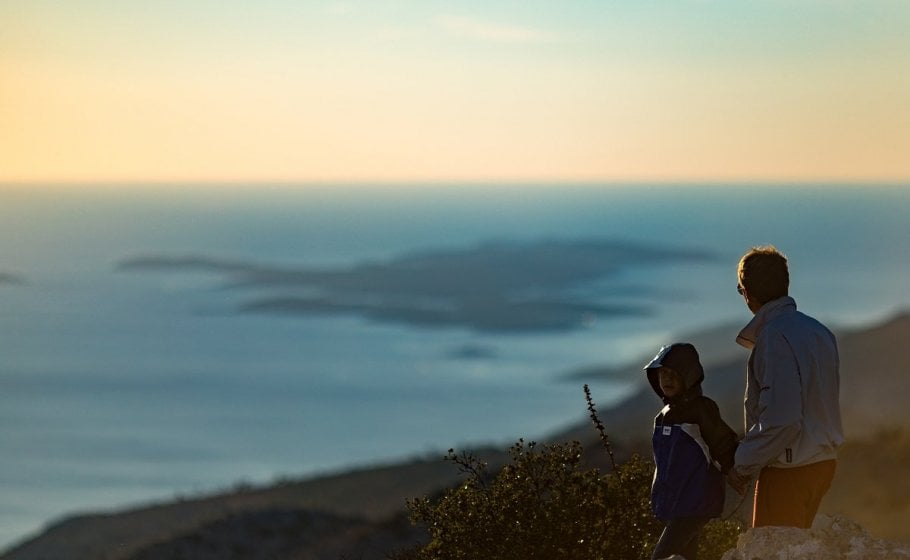 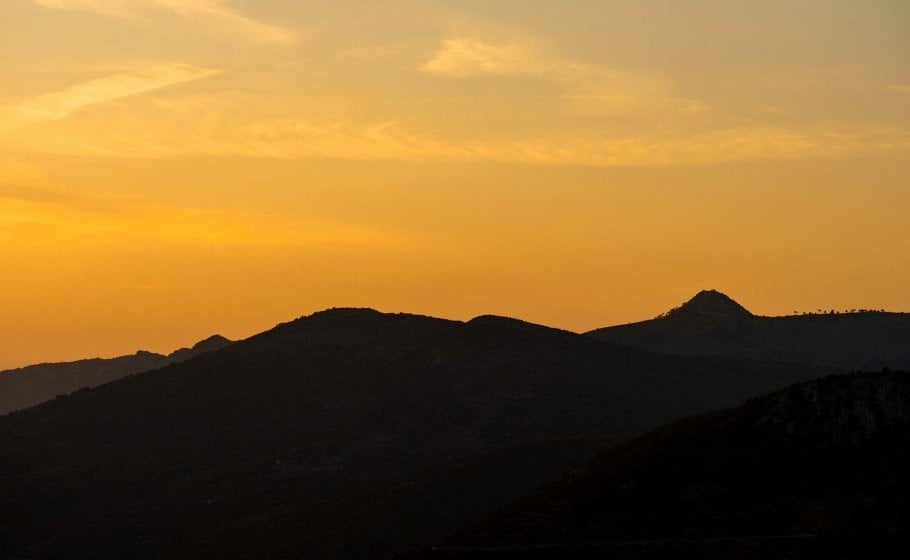 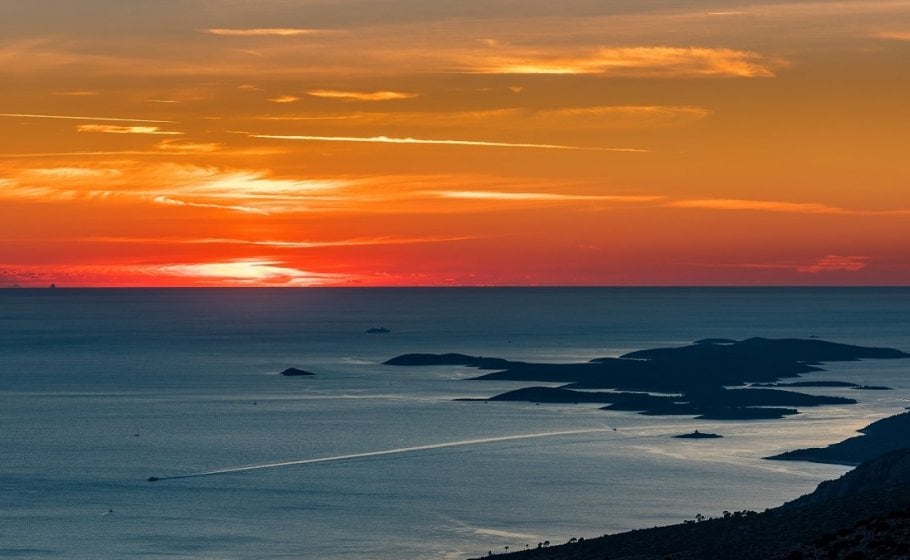 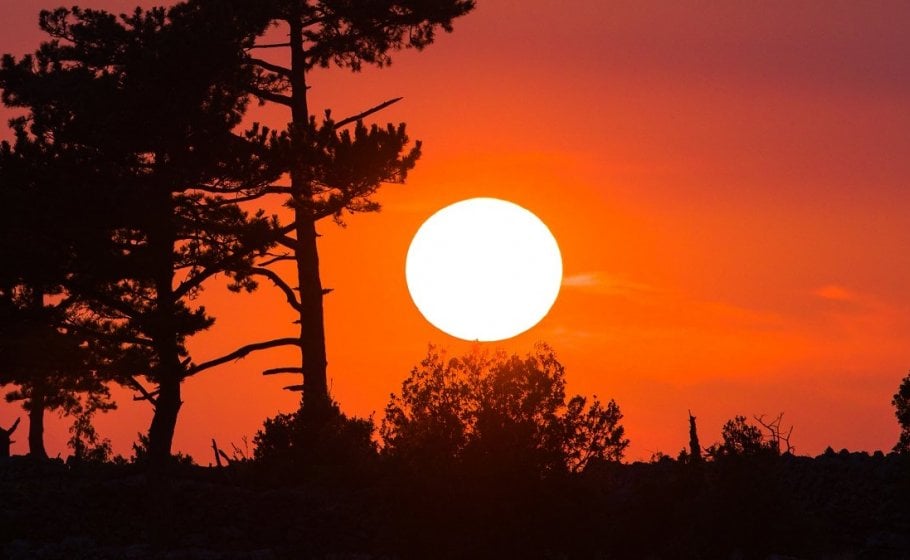 (...) Although mischievous, the sculptor knew what he was doing: we stand by our opinion that his actions were well planned-out and opened a spectacular view of the south – of Zavala, Sveta Nedjelja, and even further, to Šćedro, Korčula, Vis, and the thin line that separates and connects the sea and the sky, just to reward the curious hiker who braved the heights and climbed to the peak of the island. To the other side, the view stops at Brač and Vidova gora, the highest island peak in Croatia, whereas in the background you can see the mountain of Mosor.

Conquering St Nicholas peak is not a particular hiking challenge. Speaking in hiking tongue, the difficulty of ascent is K2T1 or – to put it in simple terms – fitness difficulty is moderate (500-1000m in height, K2), whereas technical difficulty is low (no need to use hands or aids, T1).[1]

You can access the peak from three sides: from the village of Dol, from the village of Svirče, and from Sveta Nedjelja. If you choose to walk from Dol or Svirče, it’ll take you a bit over 2 hours. The ascent from Sveta Nedjelja is the shortest – it lasts about an hour and a half – but it is also the most challenging since it’s the steepest. Once you conquer the peak, on the eastern side of the chapel you’ll find the seal of the peak in a hiker’s box, whereas the metal seal is on the chapel’s wall. Two boxes with registries are located on the eastern side of St Nicholas’s chapel.

We have some good news for everyone who’d like to skip the joys of hiking but wouldn’t like to miss a spectacular view: you can reach the peak by car as well. You can start on the gravel road that leads from Dol or the one that starts near the southern end of the tunnel, on the new road that connects Stari Grad and Hvar. Both roads connect to the pass that is an hour’s walk away from the peak. You can see St Nicholas peak from that point fairly well. A marked path leads to the top. The first facility on the way to the top is a small fire-fighting observatory, followed by a white stone cross, and finally St Nicholas’s chapel. The stone cross was erected in 1998 to mark the 850th anniversary of the Brač-Hvar-Vis diocese, explained in detail also by the signboard placed adjacent to the cross.

The stone chapel dedicated to St Nicholas is a simple building with a gabled roof, built in this location in late 15th century and named in documents as "De Monte" or "od brda / of mountain". It was built by the people of Vrbanj and Svirče with the help of ship owners from Vrboska. According to the story, Matija Ivanić himself – the leader of the Hvar rebellion and a rock star of island history as it were – also took part in the construction. The chapel was damaged by thunder strikes several times (no wonder considering the location) and rebuilt each time.

In the old days, Sveta Nedjelja estates belonged to the people of Svirče. During winter times, the people would withdraw to the mountains and farm cattle. Most of the population were seafarers and fishermen. It is no wonder then that the chapel on the peak was dedicated to St Nicholas. The cult of St Nicholas spread along the Adriatic coast after his bones were transferred from the Mira province church to Bari, Italy in the 11th century. There are several churches and chapels related to St Nicholas from that time. According to legend, St Nicholas is the patron saint of seafarers, travelers, and children, which makes this location perfect for St Nicholas’s chapel. This allows the saint to have an overview of all sea and mainland paths, and seafarers in trouble can easily spot the saint’s "office", which increases the odds of getting the saint’s attention and mercy.

St Nicholas is known for many miracles. He brought the dead back to life, helped poor girls marry, assisted ships at risk in open seas… the list of his miracles is impressive. The story goes that in the 1960s, the people of Sveta Nedjelja feared that the statue of St Nicholas from the chapel on the peak might be destroyed or damaged (due to similar experiences with statues in other island chapels), so they took it to the village in order to protect it. The saint allegedly wasn’t pleased with their move and he soon sent hail onto the village. Since the main crops grown here are olives and vines, further hail would mean a disaster. Fortunately, the people of Sveta Nedjelja were quick to catch up on his hint and returned his statue to the chapel, in a solemn procession. The hail miraculously ceased, and life went on mostly undisturbed.

We promise you that this island Olympus is worthy of your time, and we stand by our promises. In order to make it tastier and to include all senses – in the vicinity of the peak, you’ll find a quaint local restaurant, where you can eat before and/or after your great Hvar challenge…

PS. Crave a return to nature? If you would like to learn about the medicinal herbs of Hvar or how to make natural creams and macerations of local plants, join us for an educational and joyful walk to the peak of St Nicholas, which includes a topical workshop as well. For additional information contact us at info@villashvar.com or call Villas Hvar concierge Dalibor on mobile +385918957733.

There is no better name for this incredible place under the sun than the name of a mountain nymph. Taygete is located on the highest peak of the island of Hvar, a place of amazingly clean and fine energy, where fairies and elves dance day in day out, and dwarves live in the pine trees. You don’t believe us? See for yourselves.