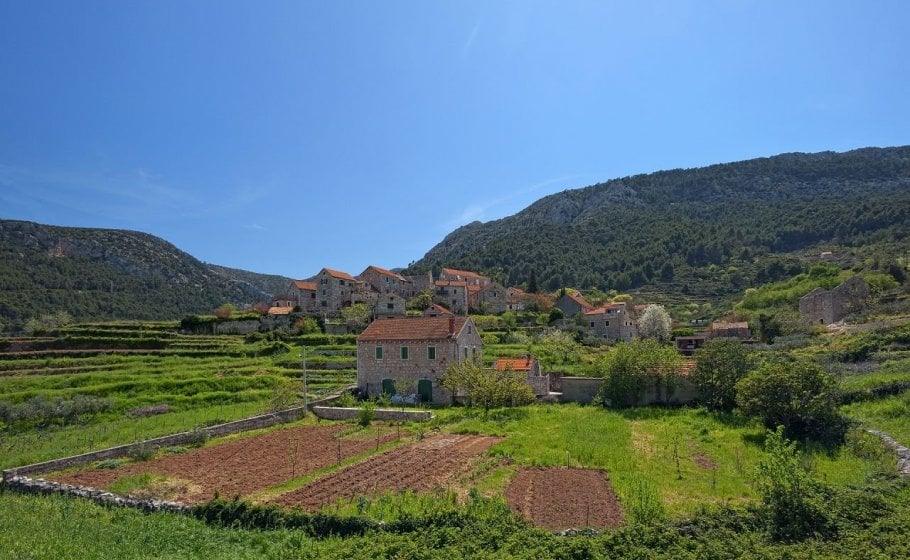 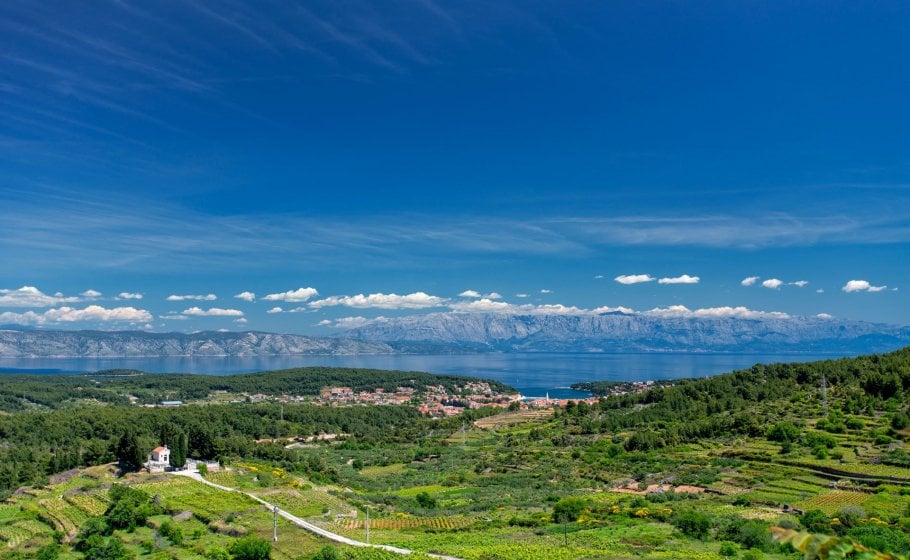 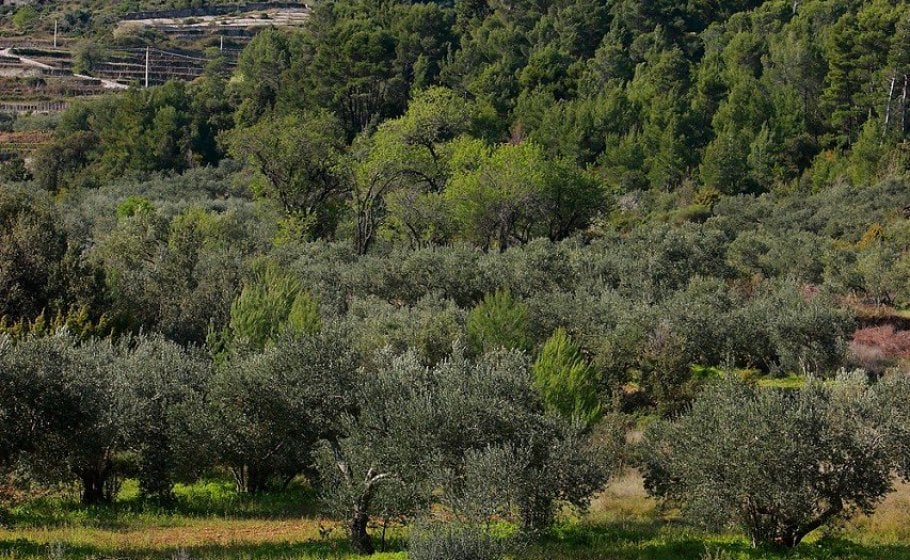 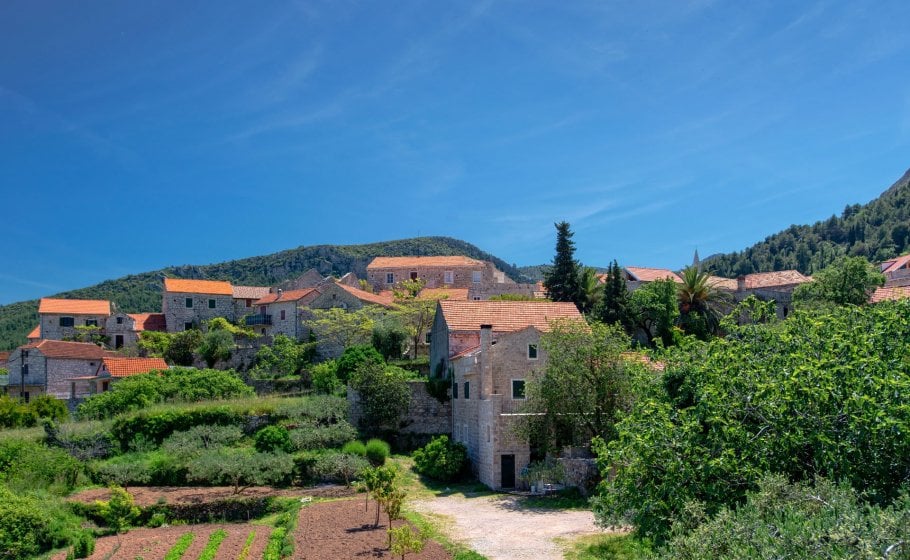 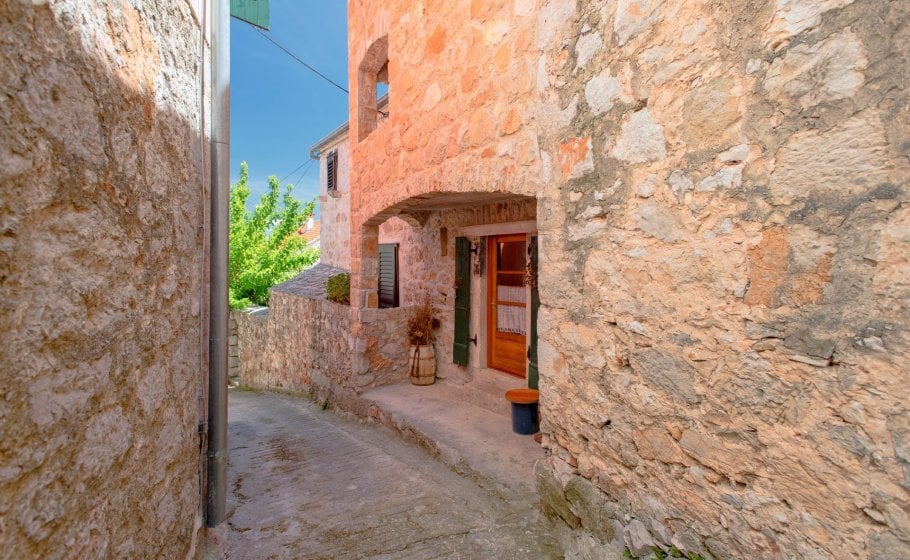 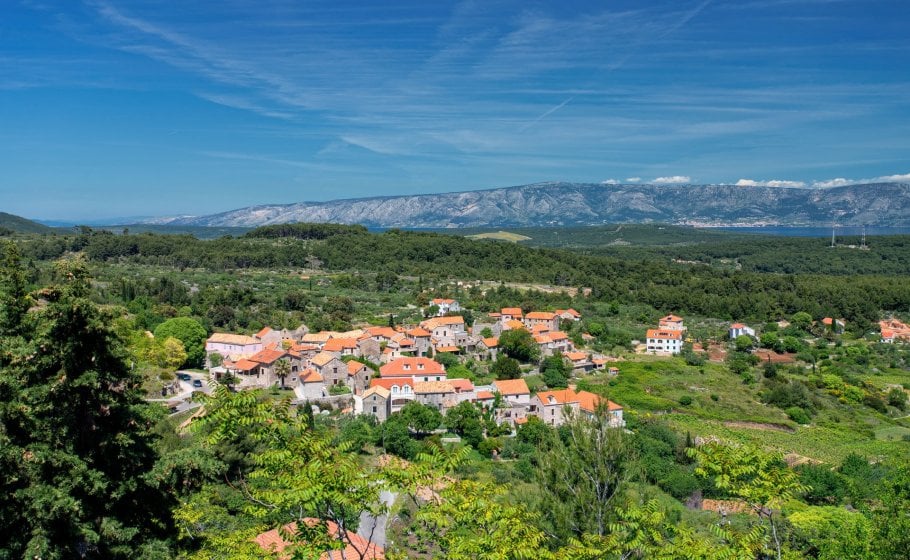 However, if you are gadget free for the time being, we will explain exact location the old-fashioned way.

Once you get off the ferry in the port of Stari Grad, take the road towards Jelsa Town. Do not turn left when you see the sign for Jelsa but keep driving for another few hundred meters and at the next junkcion turn right. That road will take you to picturesque Pitve Village.

As for getting around – in case you arrived without a car, but you still wish to experience island roads and have a little adventure – we can help you with that at our agency, just ask as about car rental deals.

For those without car, also keep in mind that you can take the catamaran from the mainland directly to Jelsa what brings you closer to Pitve and makes your arrival to the final destination somewhat shorter. Though, we definitely recommend having a car if you plan to stay in Pitve since the place lacks typical town activities and you’d probably need to move around a bit.

The village of Pitve, one of the oldest settlements on the island, is located 168m above sea level and it consists of two parts – Stare or Gornje Pitve (Old or Upper Pitve) and Nove or Donje Pitve (New or Lower Pitve). Evident from their names they were settled in different times. The older part goes back to Illyrian times, while the newer part dates back to late 15th and early 16th century.

Town of Jelsa originally emerged as a port of Pitve what shows the importance of this village in its early days. Between upper and lower Pitve there were few structures that were built for joint use – school, parish church of St. Jacob, old and new cemetery, former library/reading room and community hall. However, throughout the years many of those places emptied out because people went elsewhere in search of a better life.

Same as in any other small place on the island, church plays a significant role in the life of people from Pitve. Patron saint is St. Jacob. Possibly the most important day in the year in Pitve and neighboring villages is Maundy Thursday. Devotional procession takes place in the night between Maundy Thursday and Good Friday. Procession starts from six different places on the island (Pitve, Vrisnik, Svirče, Vrbanj, Vrboska and Jelsa) and it is called "Za križen" (Following the Cross).

It is a five hundred year old tradition of paramount importance to the cultural and religious identity of its participants and the island as whole. UNESCO has recognized the importance of this tradition, and in 2009 the event was included in the List of Intangible Cultural Heritage in Europe.

Just as the parish church in the neighboring village of Vrisnik, the parish church of St. Jacob in Pitve (dates back to the 15thcentury) is located in the amazing site from which extends a beautiful view of a large valley, the rest of the island, but also the island of Brač, Hvar channel and Makarska Riviera. As Roman heritage, in front of the church you can find the stone head of the ancient god Janus with two faces, a symbol of protection - Janus is god of doorways, entries and exits.

The architecture of these two neighboring villages, Vrisnik and Pitve, is similar as well - stone houses so typical for Mediterranean, with their small doors and windows protected by wooden shutters. Houses are squeezed together so closely and it seems like they are jealously hiding their inside courtyards, allowing only labyrinth like narrow streets to sprawl in between.

Nowadays in Pitve you can still hear the sounds of life in the village, although it is much more silent than it was before. Dominating sounds during summer are cricket noises while during winter the wind whistles throughout the stone paved streets. The main crops grown here are olives and grapes and they give a special, warm feature to this Mediterranean landscape.

Another attraction that we simply must mention is a tunnel that connects Pitve with the south side of the island. Generally speaking, the whole road leading through the village of Pitve and ending on the south side is just… let’s say - peculiar. Forget everything you've learned from your past driving experiences because this is something else.

It is difficult for two cars to past one another on this road and in the tunnel that is just impossible. The tunnel is 1400m long, it is not paved and there are no lights in it. Think of Batman’s cave! It is wide enough only for one-way traffic so the traffic lights at the entrances regulate whose turn is it to go through. But if you decide to go through it – you will be rewarded with an amazing view and exquisite beaches once you get to the south side.

Speaking of beaches, almost all types can be found in this area – depends just which way you are willing to go and what is your personal preference. On the south side there are numerous pebble beaches in Zavala, Ivan Dolac, Jagodna and Sveta Nedjelja. All those beaches are famous for their crystal clear sea that reflects all possible shades of blue. Near Vrboska town there are gravel and rocky beaches and also a nudist beach. Near Jelsa, however, in the place called Grebišće you can find the only sandy beach on the entire island.

If you want to exercise or play some sport you are in the right place. This area is ideal for running and cycling. The biggest challenge is the old path from Vratnik pass to Zavala – serpentines takes you over the hill of St. Ante (550m) and we truly recommend this path for both experienced hikers and for the beginners. Once you take this path you will understand why we love it so much.

Shopping in Pitve is not an option, you’ll have to go to Jelsa where you can also find a pharmacy, a doctors office and a bank.

At the very heart of the island, among the little hills, you’ll find a lot of amazing natural attractions but also one specific thing that cannot be find in the towns. We are talking about the romantic ambiance of small, rural restaurants that serve traditional cuisine of our ancestors. In such places you can enjoy the scenery as well as the variety of colors, smells and tastes of the local food and delicious culinary specialties. We definitely recommend the charming little konobas since they are our favorites as well. Let's not forget - Konoba Duboković in Pitve is definitely a must when mentioning traditional restaurants in the heart of Hvar Island.

And to sum up why we consider Pitve, or neighboring Vrisnik, such great locations for holidays - the atmosphere is utterly peaceful and incredibly beautiful nature that spreads all around allows you to relax and focus on what really matters in life – your loved ones.

We truly believe that the idea of "a good life" is hidden among these little hills in the heart of Hvar island.

Hedone is an authentic Mediterranean estate located in the picturesque village of Pitve. The spirit of old, almost forgotten Dalmatia still present in these stone houses + an amazing view + the garden where organic vegetables are at your fingertips + the pool = what you get is simply a fantastic place.