The origins of the Hvar Islanders

We can’t use DNA analysis for this. Therefore let’s study the habits of the old Greeks and the old Hvar residents a little bit. They are described in the historical books, and we can compare them with the behaviors and old customs of the Hvar residents today.

Several local populations of Ancient Greeks often fought one another. Perhaps this was some form of a game? Possibly similar to the Olympic Games? A bloody competition?

The competitions in Greece, in Olympia, and on the Peloponnese were also bloody and brutal. Kill or you will be killed!

Later, a lot of blood was spilled in Dalmatia. The soil was painted crimson from all the fights of the local populations.

Such terrible conflicts between the so-called little and big waterfront of Vrboska’s lagoon. So much blood flowed there! The conflicts arose because of the controversial point. Should Vrboska be an independent village, or fall under the administration of Vrbanj.

Vrboska developed as a harbor of Vrbanj. The controversial question wasn’t solved in a democratic way, but with an armed force. We should be glad that no stones are hurled during the yearly Easter procession through the villages Vrbanj and Vrboska. Such peaceful times today, at least between the little and big waterfront. Although, brothers do struggle among themselves even today. A clay tile is flung every now and then.

When we consider the 400 years old UNESCO-protected Easter procession today, the impressive men of Vrboska at the head of it certainly draw the eye. The men, who carry the 20 kg ultra heavy golden candle stand along the 20 km of paths of the island. It seems to me as if I am looking at Odysseus himself. Huge, powerful, sunburned, rough features. Do those men originally hail from Rome?

The people of Vrboska love art, music, just like the ancient Greeks.

The ancient Greeks sang different kinds of songs. Funny songs on celebrations with plenty of wine, sad ones at funerals, and military marching songs, encouraging the pace of soldiers on route to the battlefields.

Singing old songs while carrying the heavy wooden cross and the candle stands at the Easter procession invokes a certain melancholy. Is this a ritual from Ancient Greece? When Roman Emperor Constantine strengthened Christianity, the religion changed, but not the rhythms and the melodies of the songs. Not at least on the island. 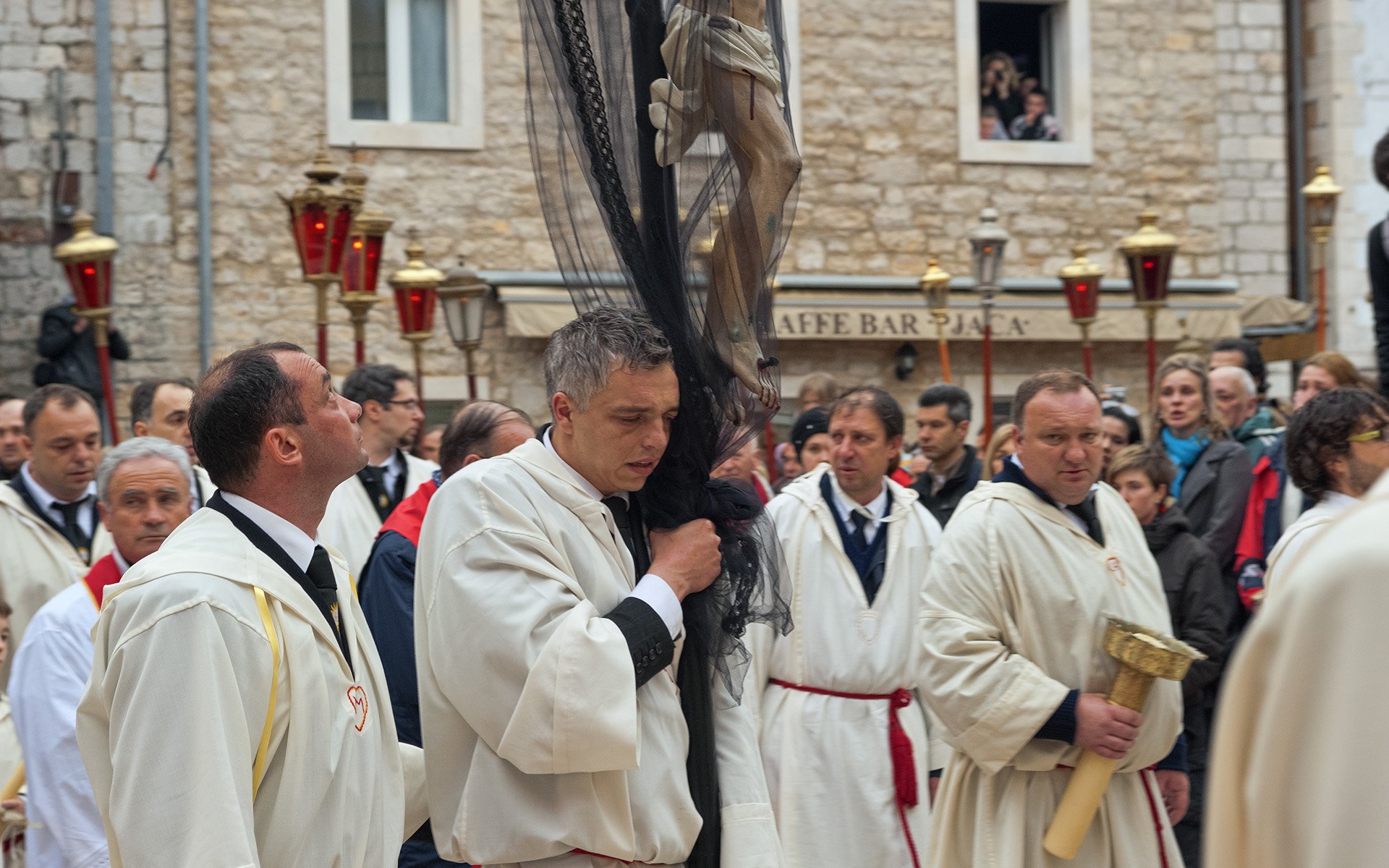 As for me, who carried the heavy cross in 2007, in the night from Holy Thursday to Good Friday, for 21 km, or 9 hours, over the island — I am utterly fascinated by this procession.

When the long procession arrives at one of the churches, there is almost a sad atmosphere. Mystic, concentrated, and disciplined, no matter if the head falls sidewards because of the tiredness. And then — after leaving the church, especially downhill in the village Vrisnik, when you move down along the narrow lanes towards the village Svirče, pleasure arises. The glad song “ Jesus’ Darling” is stroked up with an echo, like at a military march, motivating you to pick up the pace.

The old Greeks loved histrionics. We can find that gene in the inhabitants of Hvar town. One says Hvar town has the highest concentration of actors in the world. 2000 amateur actors, because of the ancient Greeks, the Romans and the Venetians who build the public theatre.

Perhaps because of this, famous personalities like Orson Wells, Jeanne Moreau, Martin Freeman, John Malkovich, Jodie Foster or Tom Cruise visited Hvar. And perhaps Hvar town and Vrboska village made an arrangement: the actors to Hvar, the artists and the valuable paintings to Vrboska’s churches.

This chapter contains some very courageous interpretations. They have nothing to do with science. But — they should compare different populations, which are perhaps not so different!